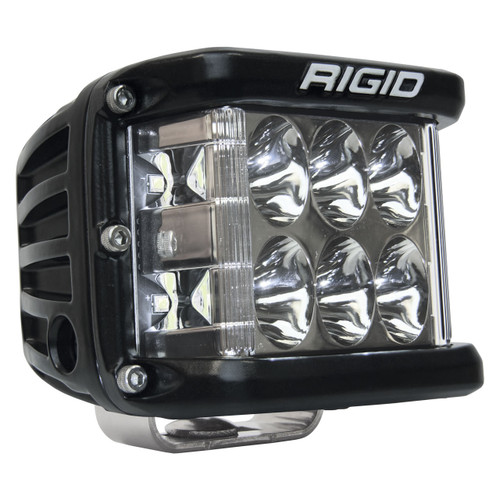 The NEW RIgid Industries PRO Series Dually Side Shooters are the BOMB. These incredible compact, tough-as-nails lights put out a whopping 7,100 lumens PER LIGHT while drawing only 72 watts with a 120 beam that is the ultimate combination of distance and side illumination for lighting up the ditches.

For comparison, the average 55 watt halogen puts out about 700–900 Lumens. We carry and recommend the Dually Side Shooters in the Driving pattern. This light is very similar to the popular D2 Rigid light with additional side illumination that results in a 120 degree beam!

Rigid Industries is now offering a Pendant switch that is motorcycle friendly. Great for the handlebars (see related items below) and a big improvement for motorcycle applications as compared to the included "dash-style" switch.  The new Pendant Switch is self-contained waterproof switch, very durable, and mounts on the left hand control for quick access when you need to turn off the D2 PRO lights for oncoming traffic.

The Amber covers are  a great addition for daytime visibility by others as well as fog and dust conditions. These simply snap on and off and can be removed in seconds.

One of RIGID's most versatile, compact lighting solutions just got better with the RIGID D-SS PRO, Dually-Side Shooter Professional Race Output LED pod. Perfect for any application that requires a wide spread beam, including A-Pillars, Fog Lights, and motorcycle applications. The D-SS PRO incorporates powerful optics and recently improved LED technology for greater output with the added benefit of additional LEDs aimed to the side for a much broader beam. The D-SS PRO packs a powerful punch with up to 102% more raw lumens depending on the optics chosen The D-SS PRO fixtures boast up to 120-degrees of horizontal lighting coverage when used in pairs or when used in the single light applications. The main forward-facing LEDs are available with RIGID\'s advanced Spot, Flood, or Driving optics, so there\'s a D-SS PRO lighting solution for nearly any application. The D-SS PRO LED lights are available in pairs with three side-shooting LEDs on one side of each fixture, or in single applications with a pair of side-shooting LEDs on both sides of the fixture. Only RIGID provides a broad, powerful lighting solution in such a compact package..

Specter Optics: This Specter Optics System is our most advanced optics system yet. Our engineering team designed the six LED Specter system to project light not only far, but also wide. Rather than a conical beam, the Specter projects an oblong beam that is wider than it is tall. It directs the light to right where it’s needed, instead of sacrificing light to the ground or an empty sky.

Driving Pattern: The Driving version of our Specter Optics System projects a more concentrated beam to provide visibility at greater distances while still acting as a medium flood light. This ability to act as both a long distance spot and wide area light makes it one of our most popular options.

Quality Construction: Rigid’s circuitry were designed in-house to be more powerful, be more efficient, and generate less heat. Their durable cast aluminum housings feature custom, over-sized heat sinks which keep the temperature down and allow our LEDs to run cooler and brighter. They give our housings a high quality powder-coat and finish them off with a custom-molded rubber seal and an unbreakable, scratch resistant lens. Rigid Industries LED lights are engineered to withstand whatever you, the road, or nature can throw at them.